Penalty under section 221 is levied when there is a default in payment of tax. Under sub-section (1) of section 221, the assessing officer is empowered to impose a penalty where an assessee is in default or is deemed to be in default in payment of tax. The said penalty is leviable in addition to the amount of the arrears and the amount of interest payable under section 220(2). Further, in the case of continuing default, the assessing officer may direct to pay further amount or amounts by way of penalty, so, however, that the total amount of penalty does not exceed the amount of tax in arrears. However, such a penalty is discretionary and can be waived where reasonable cause exists for such default.

Here an attempt is made to explain and examine what constitutes the reasonable cause for not levying a penalty under section 221.

Depends upon the facts of each case

No penalty where the reasonable cause is proved

According to the second proviso to section 221(1), the penalty cannot be levied where the assessee proves to the satisfaction of the assessing officer that the default was for good and sufficient reason.

Penalty leviable even if the tax paid before levy of penalty

Penalty under section 221 will be exigible even in a case where the tax is paid after the due date but before the levy of penalty.

According to sub-section (2) of section 221 whereas a result of any final order, the amount of tax with respect to the default in the payment of which the penalty was levied, has been wholly reduced, the penalty levied shall be canceled and the amount of penalty paid shall be refunded.

Financial crises for not levying penalties under section 221

The assessee said that it was facing severe financial hardship and the same constitutes a good and sufficient reason for not levying a penalty under section 221.

It is true that a mere default is not sufficient for the levy of penalty, but in the instant case, the assessee used the TDS amount to meet various business commitments. Further, it was continuously making defaults on payment of TDS to the government account, which is very serious in nature.

One can understand the financial difficulties the assessee was facing if it was in defaulter for a short period. But in this case, the assessee’s conduct was that it continuously defaulted the payment of the TDS amount to the government account.

The only reason the assessee mentioned for non-payment of TDS was financial difficulties, which under these circumstances, did not appear to be sufficient. Accordingly, the penalty was confirmed.

Penalty under section 221(1) cannot be waived merely on the ground that self-assessment tax is paid before such levy of penalty. There existed good and sufficient reasons to mitigate said default.

Statutory provisions regarding the transfer of input tax credit on sale, merger, lease, or transfer of business.

Sub-section (3) of section 18 of the Central Goods and Services Tax Act, 2017 (in short ‘the CGST Act’) deals with the transfer of credit on sale, merger, lease, or transfer of business. Accordingly, where there is a change in the constitution of a registered person on account of the sale, merger, demerger, amalgamation, lease, or transfer of the business with the specific provisions for transfer of liabilities, the said registered person would be allowed to transfer the input tax credit which remains unutilized in his electronic credit ledger to such sold, merged, demerged, amalgamated, leased or assigned business.

Procedure for transfer of credit.

The procedure for transfer of credit is prescribed under rule 41 of the CGST Rules, as under:–

(i) The registered person would furnish the details of the sale, merger, de-merger, amalgamation, lease, or transfer of business, in Form GST ITC-02 electronically on the Common Portal along with a request to transfer the unutilized input tax credit lying in his electronic credit ledger to the transferee (no time limit is prescribed for filing Form GST ITC-2);

(ii) In the case of a demerger, the input tax credit shall be apportioned in the ratio of the value of assets of the new units as specified in the demerger scheme.

The ‘value of assets means the value of the entire assets of the business, whether or not input tax credit has been availed thereon.

(iii) The transferor would also submit a copy of a certificate issued by a practicing chartered account.

(iv) The transferee would accept the details furnished by the transferor on the Common Portal and, upon such acceptance, the unutilized credit specified in FORM GST ITC-02 shall be credited to his electronic credit ledger.

Upon transfer of the partnership firm into a private limited company, the GST registration number would get changed. However, this would not affect the entitlement of ITC of the transferee company if the transfer satisfies the conditions specified under sub-section (3) of section 18 and follows the procedure prescribed under rule 41 of the CGST Rules.

What is an Exit Management System?

No matter how great your company culture, learning & development program, or business leaders are, there is one certainty: Employees will quit. You won’t be able to keep every employee, especially in this day and age, whether for a career change, to care for their newly formed family, or just because it’s time for a change. However, it’s crucial that you do an exit interview when someone leaves to evaluate the whole employee hr software and, as a result, find ways to boost engagement and retention.

1. Help to improve staff retention:- High staff turnover is expensive since it costs money to find, hire, and educate new employees, as you are aware. Therefore, firms always try to retain and grow their skills. Exit interviews are an excellent method to learn more about why employees choose to leave your company, which will help you find a solution to the problem of high turnover with employee HR software.

2. Improve culture and performance:- Exit interviews are objective because departing employees are more likely to be upfront and honest about their feelings about your business. The real reason an employee is leaving is more likely to come to light, and it might not be what you initially assumed or were told. They are more inclined, to be honest in their evaluation of your culture. This exit Interview system is best for HRM solutions.

3. Allows you to tackle issues:- Are there any matters that need your immediate attention and could lower risk? Your team or teams are experiencing some significant problems, and if these problems aren’t remedied right once, you risk losing more workers.

4. Improve learning and development strategies:- Exit interviews may clarify that your company needs a better strategy for learning and growth. Employee turnover is more likely if they don’t feel challenged or encouraged in their jobs.

Time is equivalent to money in the business world. So why do they spend so much time conducting exit interviews?

This is so that such practices can, among other things, help firms establish benchmarks for their use of human resources:
1. Acquire Constructive Feedback:- Exit interviews are crucial for learning the business’s hidden strengths and shortcomings from the employees’ viewpoint.

2. Build a positive brand image:- Employees feel satisfied and talk favorably in public when they may voice their complaints about the company’s property.

3. Finding out the scope of improvement:- The departing employee can shed light on any human resource weaknesses that the organization still needs to consider.

4. Learn about Employees’ Perspective:- Every employee has a unique perspective on the business, the job, the people, and the workplace. The employer must be aware of this because the employee will represent it to the public.

Q1. What are the advantages of exit interviews?

A. When appropriately done, exit interviews can offer a steady stream of insightful feedback and insight on each of the three fronts. They can raise employee engagement and retention by disclosing what functions well or poorly within the company.

A. One of the best things about exit interviews is that they may be a heartfelt and meaningful way to say goodbye to someone who helped you through difficult times.

Q3. What is the objective of the exit interview?

A. to identify areas where the business may make improvements, to ensure that employees feel satisfied with their service, and, in some cases, to persuade the employee to continue working under different conditions.

All real estate projects are required to be registered with the RERA of the respective State so that authorities have jurisdiction over the projects. However, there is a dispute over the issue as to the date on which the requirement of registration under RERA is applicable i.e. on the date of receipt of the occupation certificate or completion certificate.

Requirement of Registration under RERA

Under the ‘Real Estate Regulation and Development Act, 2016’, each State of India has to appoint Real Estate Registration Authority to monitor and adjudicate real estate disputes. The relevant extract of section 3 of the Act relating to registration of the real estate projects with their concerned authority reads as:

(1) No promoter shall advertise, market, book, sell or offer for sale, or invite persons to purchase in any manner any plot, apartment, or building, as the case may be, in any real estate project or part of it, in any planning area, without registering the real estate project with the Real Estate Regulatory Authority established under the Act:

(2) Notwithstanding anything contained in sub-section (1), no registration of the real estate project shall be required-

Requirement of Registration of ongoing projects under RERA

A plain reading of the aforesaid section shows that a completion certificate is mandatory (before the commencement of the Act) and in absence of the same, one has to go for registration with the RERA authority.

Section 2 of the Act provides definitions of various terms. Accordingly, —

Occupancy certificate means the occupancy certificate, or such other certificate, by whatever name called, issued by the competent authority permitting occupation of any building, as provided under local laws, which has provisions for civic infrastructures such as water, sanitation, and electricity—[Section 2zf].

Case study: [based on – Ruling of Punjab and Haryana High Court in Experion Developers (P.) Ltd. v. State of Haryana]

Whether the project is required to be registered under RERA?

A completion certificate still not having been obtained, simply obtaining an occupancy certificate or having applied for such certificate in terms of the Haryana Building Code, 2017, the Court would not consider the petitioner to be outside the purview of the jurisdiction of the RERA Authority.

Appended below is the Pan India Compliance calendar for December 2022, employer is under obligation to contribute towards some of the above-mentioned compliances for the welfare of the employees. Each of these compliances is again governed by a set of rules and formulas. It is proven to be a deliberate attempt to violate the provisions of the law, there could be imprisonment of the employer. Please, comply with the same in time to avoid any future non-compliance so that hefty penalties and fines are not charged by the respective dept. 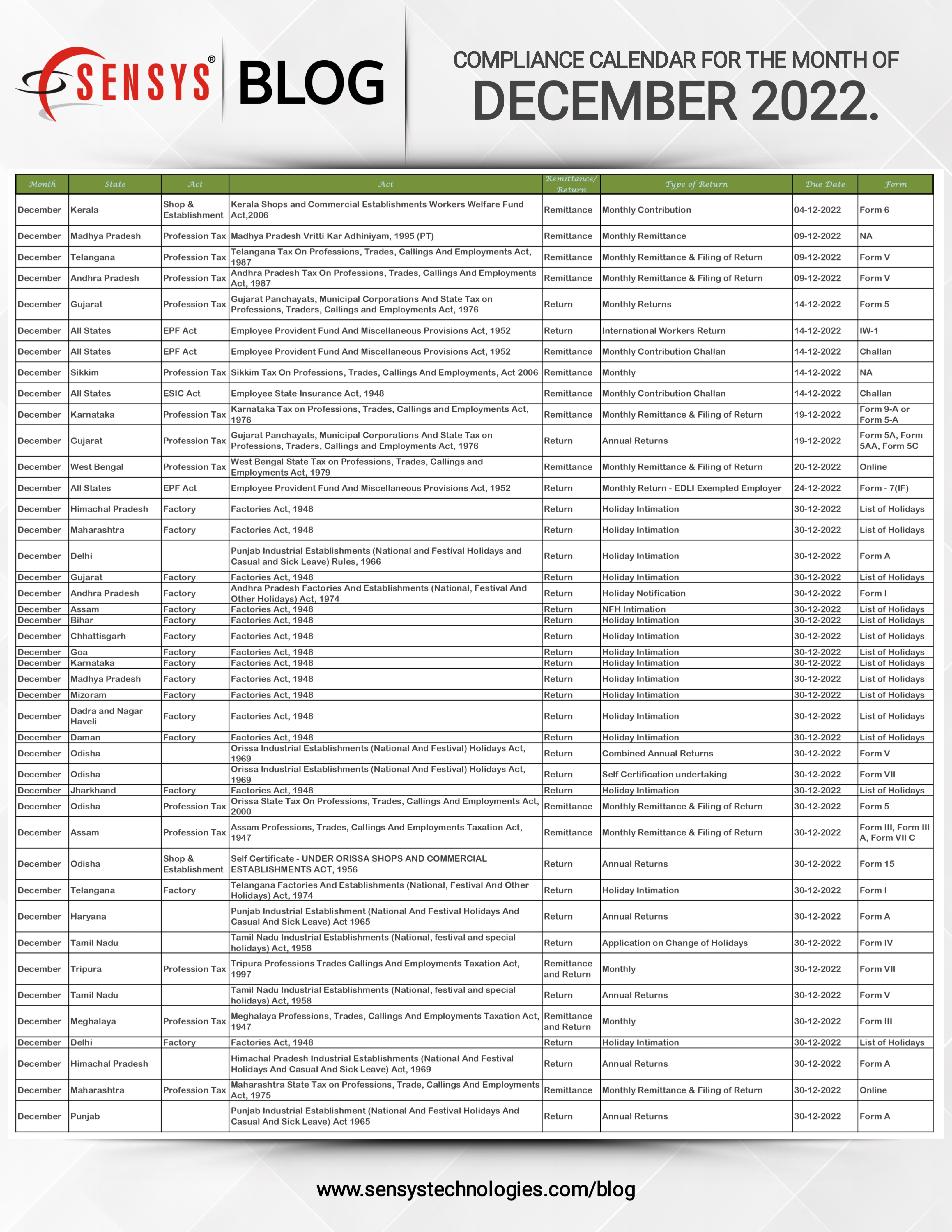