Meaning and Significance of Agriculture Income

Significance of having agriculture income: 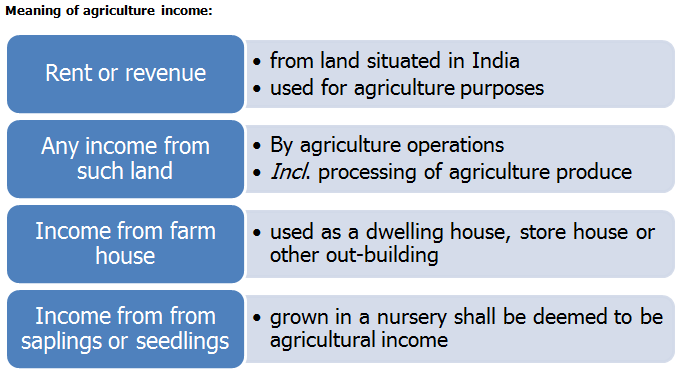 Q1. Whether ownership of land is prime conditions for claiming agriculture income?

Q2. Whether agriculture income derived from foreign lands are eligible for exemption from taxation:

Sol: – Rent or revenue would be ‘agricultural income” if land is situated in India. This condition is to be fulfilled not only in sub-clause (a) but also I sub-clauses (B) and (C) of section 2(1A). Income from foreign agricultural land is outside the scope of exemption given by section 10(1) and consequently it may be taxable in India depending upon residential status of the recipient.

Q3 What are agriculture purposes to constitute income eligible for exemption?

Q4: Whether growing of food grains and eatables would constitute agriculture income?

No, it includes all products, from the performance of basic as well as subsequent operations on land. These products, for instance, may be grains or vegetable or fruits including plantation and groves, grass or pasture for consumption of beast or  articles of luxury such as betel, coffee, tea , spices, tobacco, etc , or commercial crops like cotton, flax ,jute, hemp, indigo, etc. All these are products raised from the land.